Look carefully at the image below. Note the artist’s expressive use of tone – blocks of dark charcoal in sharp contrast to expanses of light, and then the smaller details, lines and spots that pull the image together as an ambient scene. Try to find further work by the artist and discuss the atmospheric potential of tone in your log. 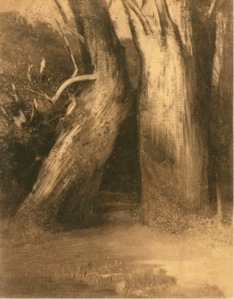 Odilon Redon (1840 – 1916) was a French draughtsman, printmaker and latterly a painter of radiant colours and mysterious and mythological subjects. He is considered as one of the outstanding figures of Symbolism. His early work was mainly in black and white charcoal drawings and lithographs.
Chilvers, I. (2009) Oxford dictionary of arts & artists. 4th ed. Oxford: OUP, p515.

Two Trees (charcoal on paper) exhibits an evocation of an atmospheric woodland bower using a variety of mark making, from direct lines of different weights and directions, spots of suggestive lights and darks, and background darker tonal areas. The lights and shadows provide a well contrasted image of tranquility, solidity and the intimacy of nature’s patterns. The ‘two trees’ are drawn as lovers connected forever – an embracing tree bowl, an almost feminine/tentative balancing reaching branch from one and the thrusting strength of growth upwards from the other. 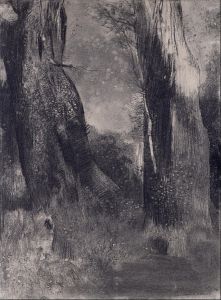 The Trees depicts a similar scene to Redon’s 1875 Two Trees. However, this time there is a separation – a kind of growing apart.

The mark making is similar, with the use of lines of different weights and directions, spots of suggestive lights and darks, and background darker tonal areas.

A real sense of growth and strength is evident in both drawings and while there is a hidden depth suggested by the darker tonal areas, there is also a real sense of lightness and flickering life in the use of small fluttering spots of light.

There is a magical quality to both drawings, one that draws the viewer into the heart of the woodland atmosphere – a mixture of expectation of things about to happen and reticence to enter and participate in this landscape. 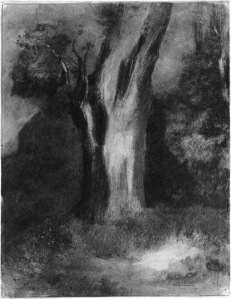 In this earlier drawing, Redon manipulated the build of the composition with layers of media:
‘… he intermittently fixed the surface and again subtracted media from it. Before the spray-applied fixative could dry, Redon reworked the damp charcoal surface with his fingers. The artist’s fingerprints are clearly embedded in the background to create a modulated tone. He used his fingers to remove charcoal from the top of the tree and reapplied it to the left of this area to add foliage to several bare branches. He may have even used his fingernail to scrape away fixed media and create the delicate blades of grass in the foreground’.
Stratis, H. K. (2011) A Technical Investigation of Odilon Redon’s Pastels and Noirs. [Online] The American Institute for Conservation. Available at: http://cool.conservation-us.org/coolaic/sg/bpg/annual/v14/bp14-08.html [Accessed: 21 May 2015].

Redon’s techniques as observed in the quote above clearly describe the innovation and thoughtful artistry of his mastery of his drawing intentions – using materials (man-made and natural) to the max!

Odilon Redon, The Raven, 1882, [charcoal on laid paper] The National Gallery of Canada, Ontario. Available at:
https://www.gallery.ca/en/see/collections/artwork.php?mkey=6828 [Accessed: 21 May 2015].

Redon was often intrigued by the weird and mysterious and was a follower of the writings of Edgar Allen Poe. This drawing of The Raven is evocative of Poe’s poem ‘… Open here I flung the shutter, when, with many a flirt and flutter, In there stepped a stately Raven of the saintly days of yore;’ .

The large black bird is drawn silhouetted against a bleak December sky, the lattice windows thrown wide. There is a real sense of mystery and bleakness about the scene, with the bird’s beady eye drilling out at the viewer ‘…his eyes have all the seeming of a demon’s that is dreaming’.

The atmosphere is laden with the uncertainty of what the bird portends: good or evil and the composition lends an eerie sense of expectation.

Odilon Redon, Head of Orpheus on the Water or The Mystic, 1880 [charcoal and black chalk on paper] Kröller-Müller Museum, Otterlo. Available at: http://commons.wikimedia.org/wiki/Category:Charcoal_drawings_by_Odilon_Redon#/media/File:Odilon_Redon_-_Orpheus%27_Kopf_auf_dem_Wasser_treibend.jpeg [Accessed: 21 May 2015].

The head ‘floating’ on the water is drawn with lines of differing weight and the light and shadow created give the effect of rising up through the water into the brightness formed by the background triangle of light. The use of tone here lends an almost ethereal feel to the drawing. Of particular note for me are the lines of the hair suggesting a water-soaked scalp from top to water line and below.

The firm black line of the closed eyelid is also a mark that suggests to me a feeling of peace at having arisen from the underworld. 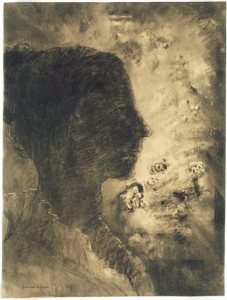 ‘I have made an art according to myself. I have done it with eyes open to the marvels of the visible world and whatever anyone says, always careful to obey the laws of nature and life. … But now in my maturity, I declare, indeed insist, that all my work is limited exclusively to the resources of chiaroscuro. It also owes much to the effects produced by the abstract character of line, that deep source, acting directly on the spirit. Suggestive art can fulfil nothing without going back uniquely to the mysterious play of shadows and the rhythm of imaginatively conceived lines.’ Odilon Redon, Artist’s Secrets, 1894. Available at: http://www.musee-orsay.fr/en/collections/around-redon.html [Accessed: 21 May 2015].

‘“chiaroscuro” (from the Italian for “light-dark”; or the French “clair-obscur”) describes the prominent contrast of light and shade in a painting, drawing or print. The primary skill displayed here is in the management of shadows to create the illusion of three-dimensional forms.’ Brownlee, S. (2013) ‘Research Point 1 – Chiaroscuro’. stuartbrownleeoca.wordpress.com, 25 October [Online learning log] Available at: https://stuartbrownleeoca.wordpress.com/category/coursework/part1/page/11/ [Accessed: 22 May 2015].

In Redon’s ‘Profile of Shadow’ the evidence of ‘… the effects produced by the abstract character of line …’ and ‘… the mysterious play of shadows and the rhythm of imaginatively conceived lines…’ is clear to see. Like in ‘Head of Orpheus on the Water’ the interplay of the darker built-up line tones of the head against the bright , subtracted light in the background and the fainter light fringes of the nose, lips and the collar’s ruff in ‘Profile’ is striking.

The ‘abstract character of line’ can be seen in the directions and weights that in areas almost looks random, but are not in the resulting effect. What looks like a tumultuous sky with an atmospheric cloudscape also appears to contain some interesting and imaginative shapes – like cloud bursts with faces (childlike and animal). What I see are childrens’ upturned faces under the chin and to the right at the edge three dogs – meant or not, imaginative or what?